The September conference provided an opportunity to learn about four different ideas and approaches after brain injury. From a book to a website to a food project and the resurrection of a career, there was certainly variety and a lot to think about.

Benjamin Clench and his dad Hugh, presented ‘The inspirational memoir of a traumatic brain injury survivor.’ This related to Ben’s book ‘Ben Again’ which, with the help of a huge number of contributors, tells the harrowing story of Ben suffering a severe head injury in the Dominican Republic in an accident that killed his girlfriend and left Ben seriously injured. Ben and Hugh provided a very balanced and factual presentation that was informative, uncomfortable and moving in equal measure. Ben and Hugh cited Ben’s survival as having hinged on a £10 travel insurance policy or as Ben calls it ‘the best £10 I ever spent’! Anyone with an interest in brain injury will be very interested in reading this book – see https://www.amazon.co.uk/Ben-Again-inspirational-traumatic-survivor-ebook/dp/B01NBW3IJW (there is a podcast on the Always Possibles website which gives another presentation of the book https://www.alwayspossible.co.uk/single-post/BEN-CLENCH)

‘Brain Injury Touchpoint’ (BITP) is a ‘work in progress’ website that has been set up by Raymond Lynch. A stand at UKABIF’s Annual Conference in 2016 enabled him to make important contacts, one of which was with ABIL and he was invited to present at this conference. Ably assisted and supported by James Humphries and John Coughlan, Raymond outlined plans and aspirations for BITP to become a central portal for brain injury advice and guidance, namely through the sharing of survivor experiences and helpful links. Raymond and John are both survivors and keen to encourage people affected by brain injury to come forward and share their experiences with them. Please check out the website https://bitp.org.uk/

The ever innovative Headway East London Group focused on their ‘Making Food’ initiative and Thomas Alexander (Food Projects Lead) seems to be establishing himself as Headway’s answer to Jamie Oliver! Thomas provided a mouth-watering presentation, in which their collaborative and inclusive approach enables members to plan and cook each day for other members, volunteers, staff and visitors. One of the members Dave, spoke enthusiastically about the enjoyment as well as therapeutic benefits of this work and it has clearly been very well received. They also brought along some of their home-made biscuits for delegates, which went down a treat! In addition, Headway run a Supper Club and their ‘Turkish Feast’ themed evening in July was a sell-out. You can sign up for notification of these on their website http://headwayeastlondon.org/news/

Dr John Murphy, Specialist Psychiatrist and Honorary Lecturer, St Georges, talked us through his brain injury journey, which began with a car accident in December 1984. At that time John was a 25 year old doctor, 4 months post-qualification who was enjoying his first job at The Middlesex Hospital. Despite serious injuries sustained in the accident, John was hopeful that at some stage he would be able to return to work. The first tentative steps towards this were taken in September 1986 where John undertook work as a research assistant. Building on this, John was able to pursue a phased return to work, which included training in Psychiatry, then moving into general practice training leading to him becoming a GP partner for 2 years before returning to Psychiatry where in John’s words he has ‘survived for 19 years’! A remarkable and indeed inspiring story.

ABIL extend thanks and appreciation to all the presenters for such an interesting, diverse and inspirational conference.

The presentations can be downloaded here: 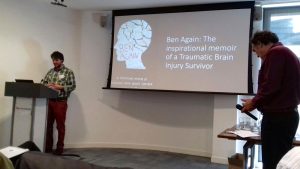 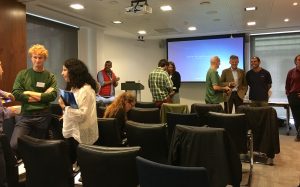 Networking during the break